Sunday the 2nd of December saw the unprecedented assembly of a galaxy of international powerhouses – influencial figures from political, social and entertainment spaces – as Global Citizen came down to Johannesburg in South Africa to celebrate the centenary of Nelson Mandela and address socio-economic issues that currently plight Africa & the world at large.

Global Citizen Festival: Mandela 100 was a huge platform for donor countries to show their support via delegates, but also for African countries celebrating Madiba and standing up for his hope for a better future – making sure that Africa was speaking up and getting its voice heard.

An array of issues were addressed as the likes of Oprah, Naomi Campbell [whose now infamous pronunciation of “amandla” was a major highlight of the night] Gayle King, Al Sharpton, Nomzamo Mbatha, Bonang Matheba, Pearl Thusi and heads of state such as Paul Kagame & Cyril Ramaphosa, The World Bank Group’s Dr. Jim Kim and many others (I thought I’d only ever see on television) took to the podium(s) to enlighten a stadium of thousands, plus the viewers at home on various concerns. The festival was hosted brilliantly by South Africa’s favorite export, the effortlessly hilarious, Trevor Noah. 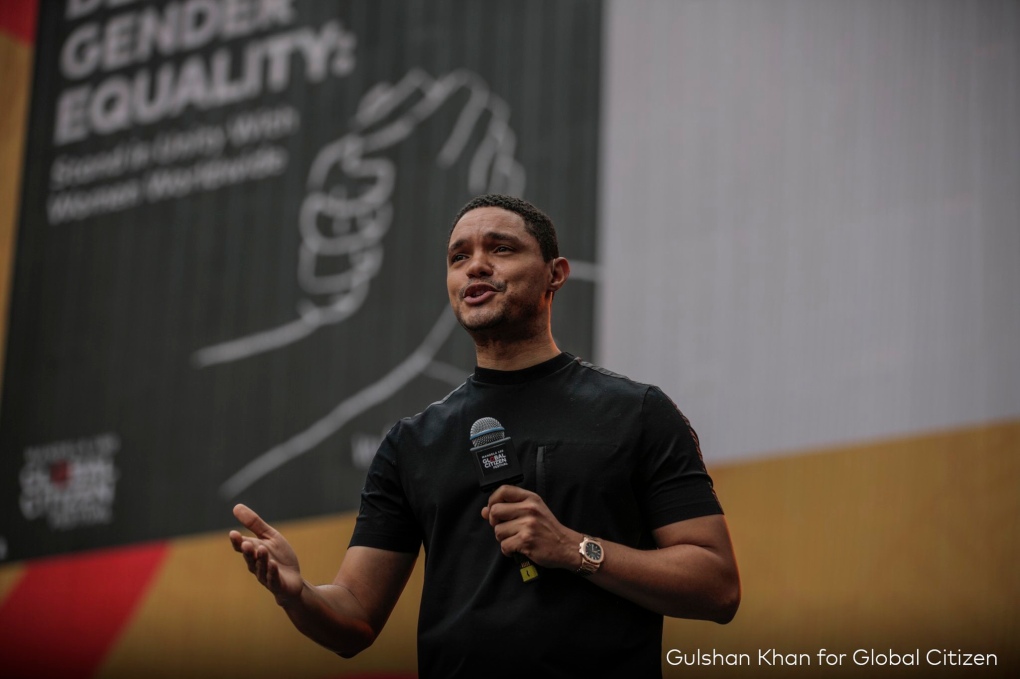 Neglected tropical diseases, HIV/AIDS and education were major highlights as each speaker sought to bring to our attention to how we, as Global Citizens, could be the generation for positive change – both by ourselves and in encouraging our leaders and people with the power to spearhead change to look into addressing these concerns in our societies.

As the legacy of Nelson Mandela was celebrated, the crowd waited with baited breath on performances by top tier local & international artists. From the timeless Femi Kuti, to Nigeria’s Star Boy WizKid, South Africa’s spirited Cassper Nyovest and international musical royalty The Carters (Beyoncé & Jay Z) – this setlist had the makings of the average music lover’s bucket list. 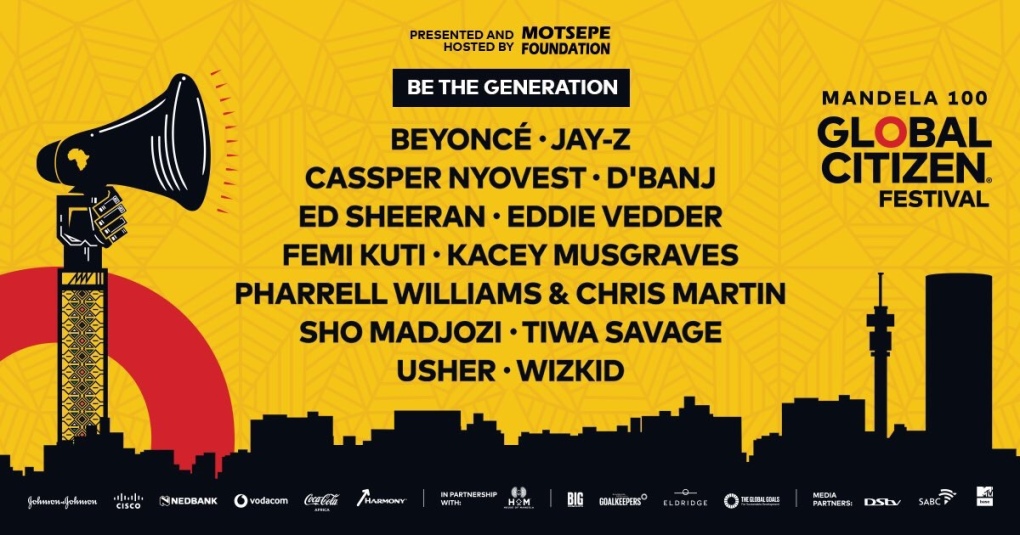 The queues leading to the festival were a sight to behold as attendees, both local and international, flocked to FNB Stadium for what could possibly be the concert of their lives – at least that’s what it was for me.

I walked into the stadium still in total disbelief that I was actually going to be a part this phenomenal experience, feeling everything in real time – in the flesh.

I had missed the opening by The Soweto Gospel Choir but I could hear the roar of the crowd as they took the stage. Caught in the lines, I missed WizKid, Usher, Black Coffee & Sho Madjozi too, and the rave reviews from everyone that saw them gave me feelings of slight regret but also joy still because there was more to come.

As we walked down into the stadium, Femi Kuti had just begun to conquer the stage and was giving a thrilling performance of his ‘Bang Bang’. His set dripped in West African authenticity, as he energetically ran across the stage while singing. I couldn’t believe his energy & the choreography that matched the very sensual lyrics. I’ll never get over watching this African legend showing off his vocal & instrumental prowess.

Femi was followed shortly by another Nigerian superstar, The KokoMaster also known as D’Banj. His signature “I’M D’BANJ!” punctuated a hype delivery of some of his most popular hits…

“I have a confession…” a shirtless D’Banj sang, at a point, as the crowd echoed in response because they knew what time it was.

More representation from Nigeria as Tiwa Savage took to the stage after a brief introduction by THE Naomi Campbell. Adorned in a colorful one piece ensemble, she also took us on a short trip featuring her biggest hits – from “All Over” to her hit with South Africa’s R&B crooner Donald “Raindrops“, Miss Savage is well on her way to African Pop Princess royalty. 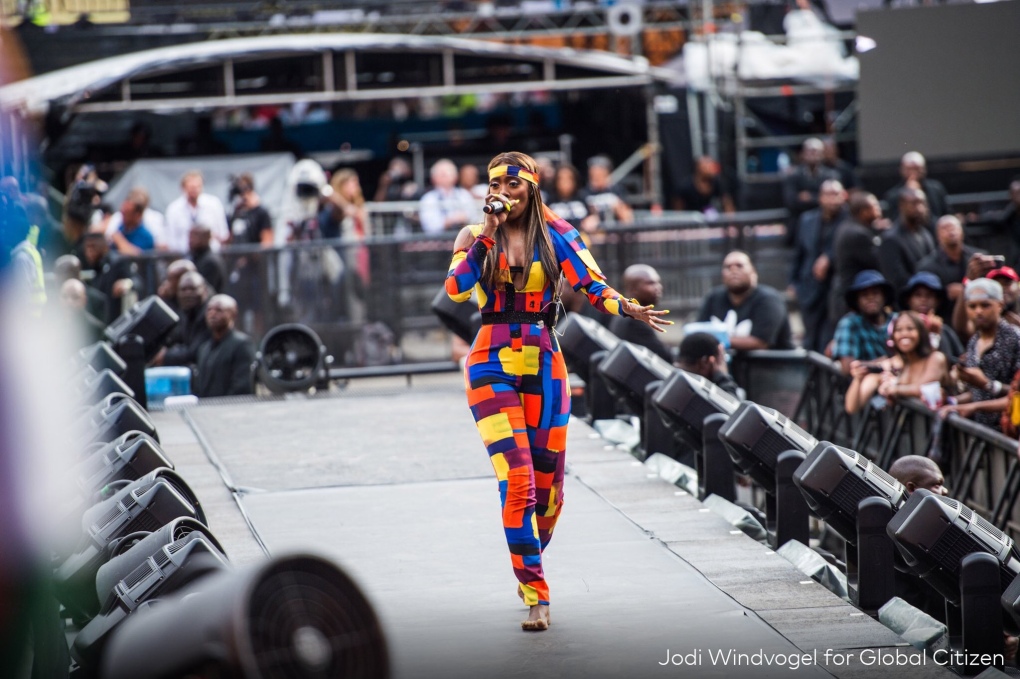 Pharrell, who looks even younger in the flesh, [*whispers* vampire] took to the stage next. He performed in boyish beige shorts true to his Skateboard P alias. Known for his exemplary production, he performed a string of his best known jams – “Freedom“, “Lemon“, “Drop it like it’s hot“, “Frontin’“, the more recent “Feels” to bringing out Usher mid-set, who gave a quick performance of “You don’t have to call“. Then Chris Martin joined the party with a fun rendition of “E Lo“, and then Pharrell wrapped up his set with “Happy“. 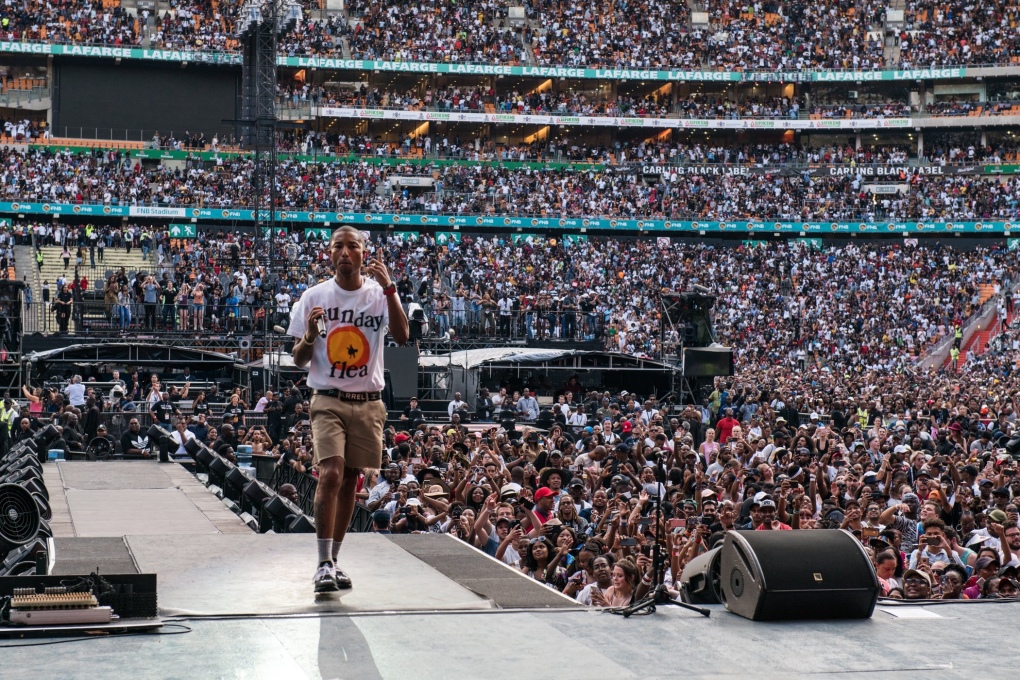 Ed Sheeran stepped onto stage (just him & his guitar) just as the sun set, kicking off his serenade with “The A Team” as the stadium lit up and the crowd provided backing vocals, sometimes taking the lead. Instead of outfit changes, Ed brought out a new guitar for every next song. So a roaring guitar solo, “Thinking Out Loud“, “Shape of You” and a shocking treat as he spat some serious bars, Ed Sheeran had the crowd singing, crying, rapping & hugging all in one set.

As the night was heading towards its peak, Mr Fill Up (South Africa’s Cassper Nyovest) invaded the space – opening with “Tito Mboweni“, as his electric persona charged the crowd to feed back his energy. Chris Martin stepped out to join him as they performed “Timbuktu“, later on joined by surprise guest UK rapper Stormzy. 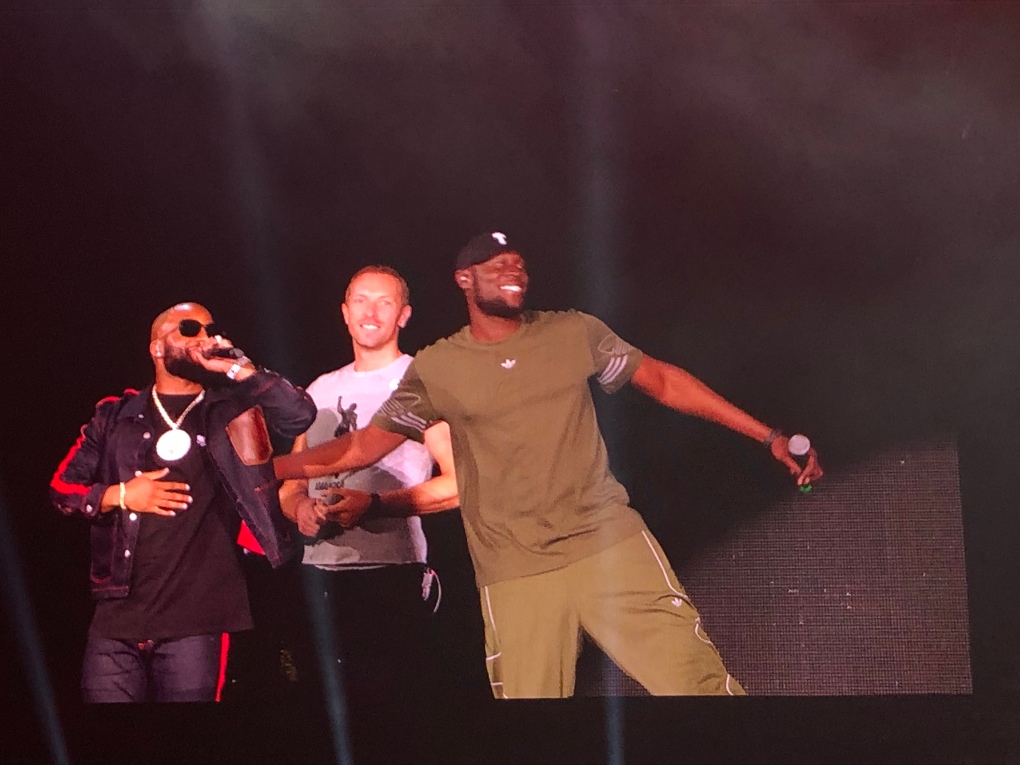 He then went on with his hits “Baby Girl“, “Ghetto“, his more recent “Ragga” and closing it with “Doc Shebeleza“, cementing his spot as one of Africa’s favorites.

But you can’t talk about ‘Global Citizen: Mandela 100’ without a mention of what followed Cassper Nyovest. A few more very important speeches, by Oprah, current South African head of state Cyril Ramaphosa and the man of the moment Patrice Motsepe, it was time for the main event.

The Carters were introduced by Dave Chappell and “EVERYTHING IS LOVE” bold on the screen.

An intro video, detailing the love, life & times of a couple on the run (Jay Z and Beyoncé), as the crowd yelled in disbelief that this moment was real – phones out, for control.

Beyoncé and Jay Z strode to the front of the stage, hand in hand, and opened their set with Jay Z’s “Holy Grail” – Beyoncé murking a hook originally sung by Justin Timberlake and Jay Z shining with his verses as she danced in the back. 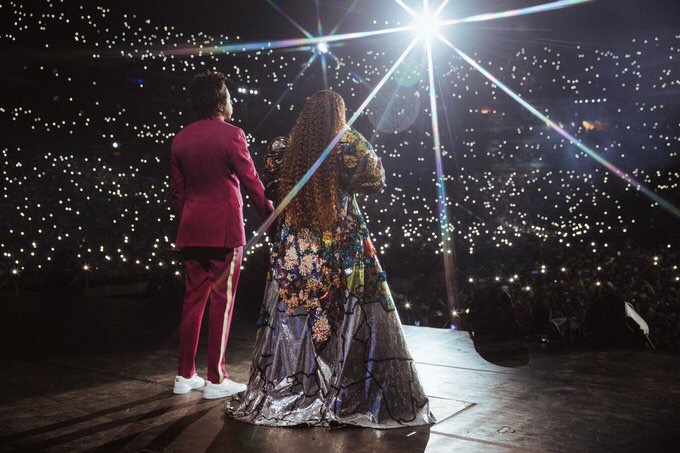 Carrying on with the duets, they performed “Part II (On The Run)“, “who wants that perfect love story anyway? cliche cliche cliche” Beyoncé belted out as she clung to Jay Z. And then taking us back in time to when their story began, their first official collaboration “03 Bonnie & Clyde“. At some point during this performance Beyoncé walks down one of the rumps and she’s so close, only then do I believe she’s real and this is happening.

After a costume change and a video interlude that included audio from Tekno’s “Pana” and Miriam Makeba’s “Malaika“, Jay and Bey step out to grace us with the more recent “Apeshit” off their joint album, sending the FNB stadium ablaze as the audience sings along to the lyrics. “skrrr skrrr skrrr”.

Pharrell joins the couple for a performance of “Nice“, also off their recent collaborative effort Everything is Love. They end this collabo session with “Drunk in Love“, flashing lights, a vocal-rap and choreographed chemistry that only the music gods can fashion. 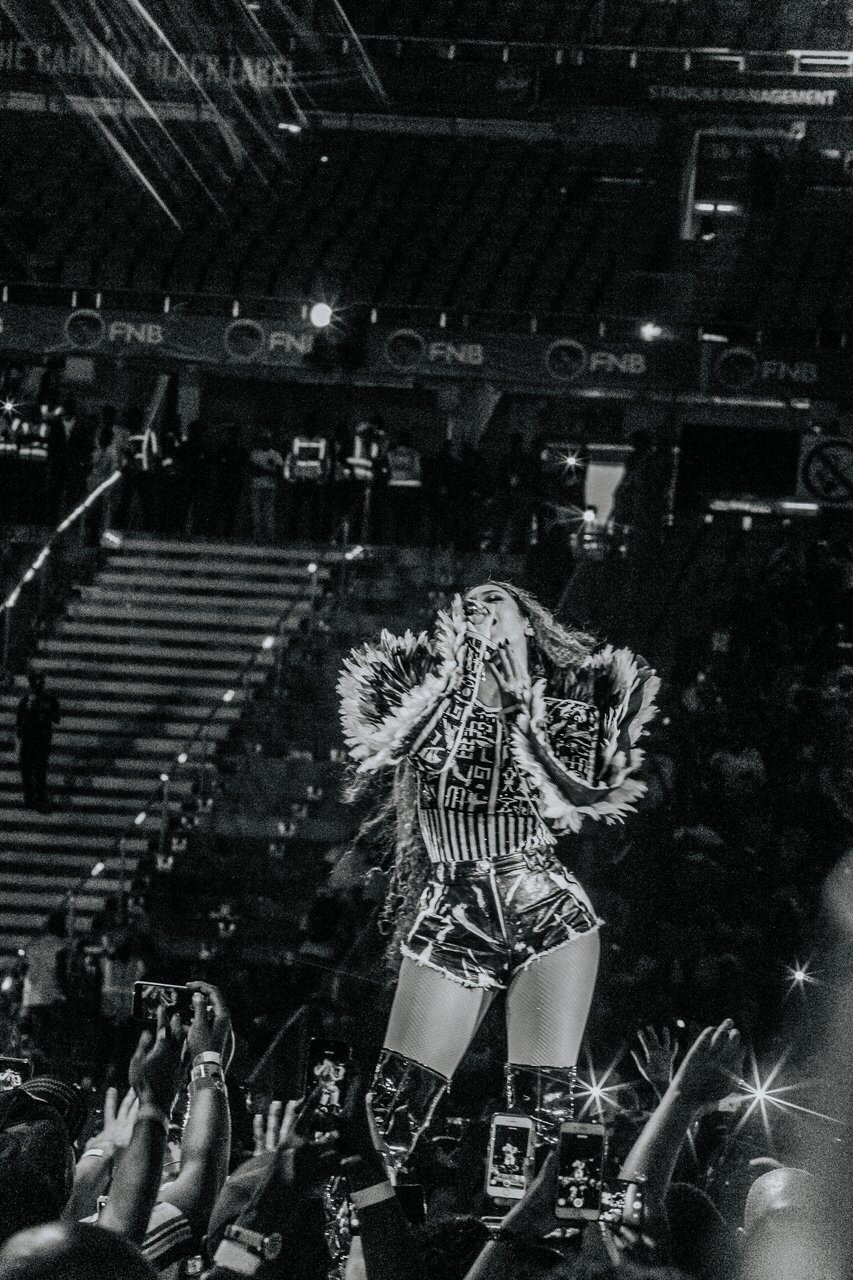 Jay Z’s solo jams were a massive hit with the crowd as they rapped and raved along to “Empire of State of Mind”, “Niggas in Paris”, “Beach is Better” and “The Story of OJ”. I personally didn’t think I was a Jay Z fan, but after the night? I stan.

Beyoncé’s solo sets featured her in more outfit changes (all these years I’ve watched her shows and I honestly don’t know how she does it). A riveting performance of “XO”, “Halo” with a new arrangement featuring The Soweto Gospel Choir that had the queen catching The Holy Ghost and a surprise appearance by Ed Sheeran for their “Perfect Duet” that brought many in the crowd to tears.

Stepping out in a bright yellow ensemble, her dances in solid colors as well, completing the rainbow spectrum she performed the black power anthem “Formation”. A poignant representation of inclusion and diversity, in the Rainbow Nation – South Africa. “Run The World (Girls)” followed as she reminded us who really runs the world – “strong enough to bare them children then get back to business.” 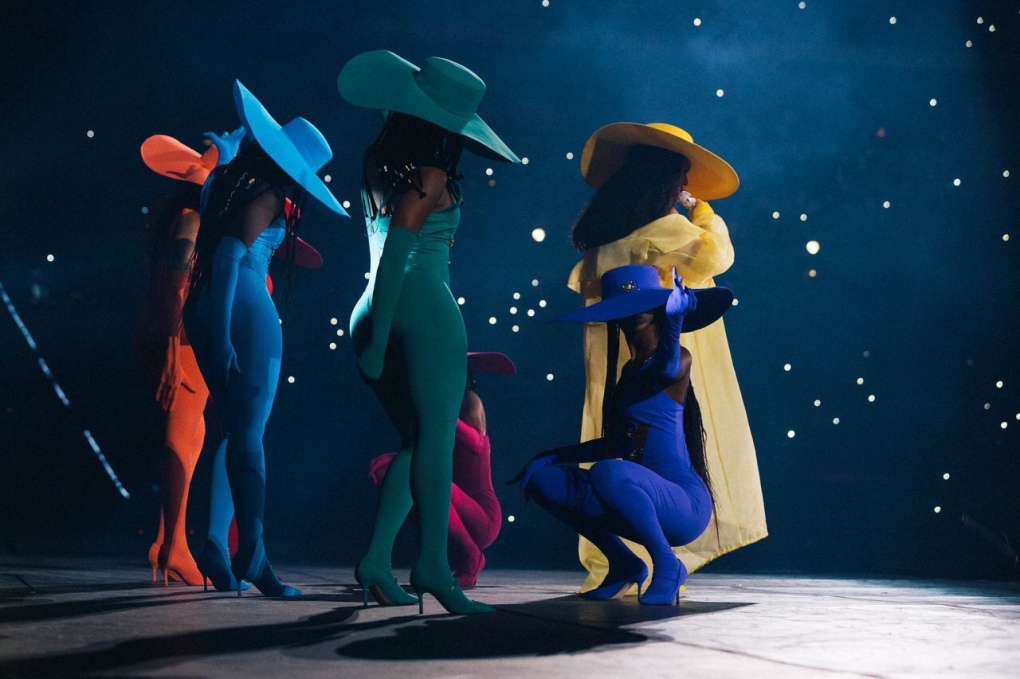 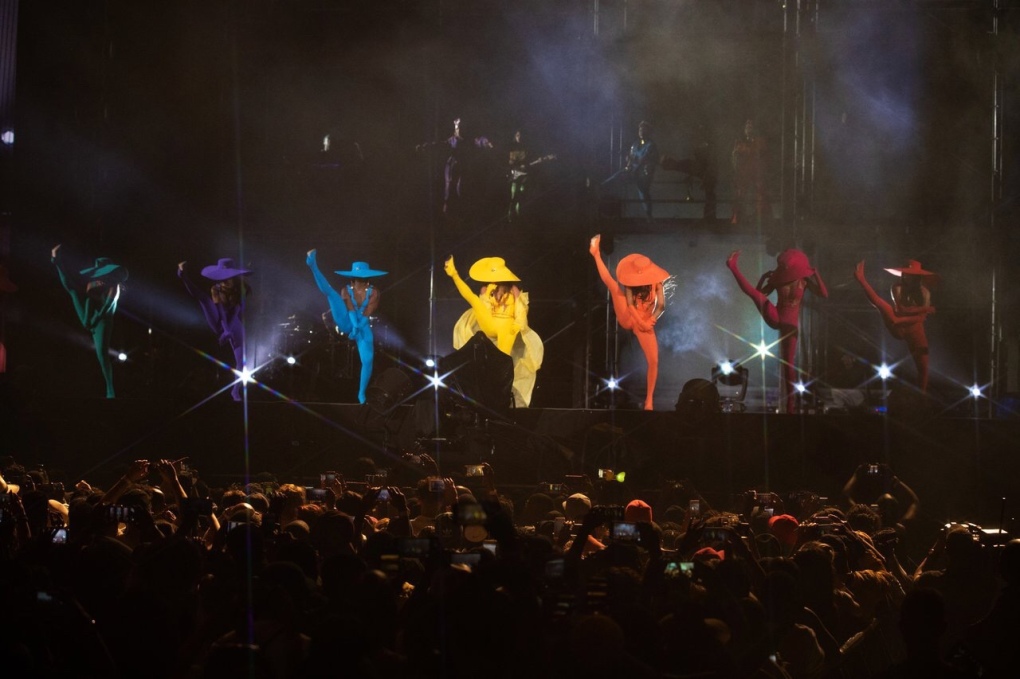 Then they graced us with more from them as a couple, as they performed “Crazy In Love“, “Deja Vu” and then closed off with Jay Z’s “Young Forever” – originally performed with Mr Hudson, Beyoncé gives this number a spin that highlights how seemingly effortless her and Jay Z collaborate. Ending the night with the crowd belting “forever young, I wanna be forever young” as the couple hit the adlibs and then punctuated the show with a kiss.

A show that left the audience in applause minutes after the couple had ended.

A night to remember, thanks to Global Citizen and The Motsepe Foundation.

Join the movement by taking action here in support of the UN’s Global Goals to end poverty.